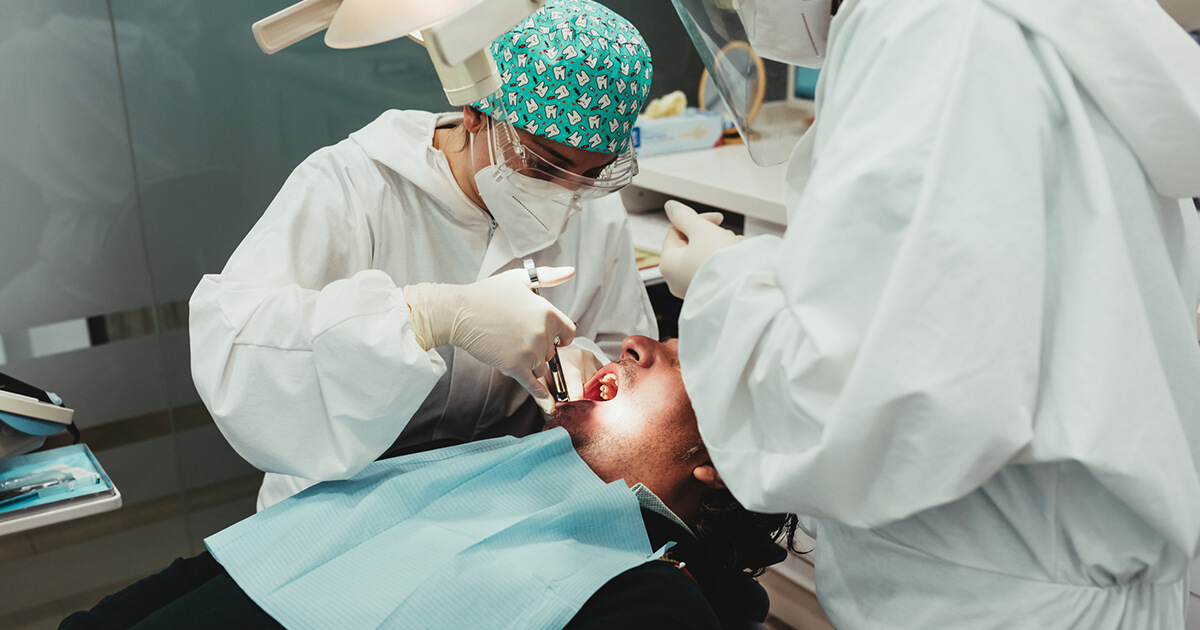 These are free sample practice questions taken from the Board Vitals NBDE II Question Bank.

A patient presents for routine examination. Radiographically, the heavily restored lower right first molar shows apical radiolucencies of both the mesial and distal roots. The patient does not recall any past symptoms. What is the most likely diagnosis?

Over time, heavily restored teeth can develop asymptomatic pulpitis leading to pulpal necrosis. The necrotic pulp can then exude from the roots and slowly create asymptomatic abscesses. When obvious periapical radiolucencies are found on radiographic examination, and there is no recollection of symptoms, the most likely diagnosis is that of chronic apical periodontitis.

Acute suppurative periodontitis (a) involves quick onset of necrotic outflow from the tooth. This condition would result in painful symptoms and sensitivity on biting. Another term linked with this would be acute apical abscess.

Chronic periodontal abscess (b) is a condition of the periodontium, not the pulp. This type of abscess would be visible radiographically, but the focus would be on degeneration of bone at the coronal half of the tooth. The radiolucency would proceed in a coronal to apical direction, rather than from the apex outward.

Irreversible pulpitis (c) presents with spontaneous, intermittent pain and involved vital pulp tissue slowly dying. Generally in this condition, radiographic bone changes have not yet occurred because the pulp has not yet become necrotic.

Pulp polyps (d) are most often found in young teeth that have had the carious process destroy some of the crown of the tooth. This process then creates an opening from the pulp to the oral cavity and the pulp tissue will almost balloon into the opening. This polyp of tissue is indicative of pulpitis in that tooth. It is asymptomatic, but does NOT generally involve radiographic changes at the apex.

Which of the following drugs is most likely to result in decreased metabolism of opioids that undergo hepatic metabolism?

Most opioids undergo hepatic metabolism, via either phase I or phase II reactions. Phase I reactions involve oxidative and reductive reactions, and are orchestrated by the cytochrome P450 enzyme system. Phase II reactions involve conjugation of the drug to a specific substrate. These reactions produce metabolites that are excreted renally or via the biliary tract. Some metabolites may have active analgesic activity, similar to their parent drug, and in some situations, with added side effects and toxicities. It is important to be aware of common inducers and inhibitors of the cytochrome system, which can decrease and increase duration of action of opioids, respectively.

A) Carbamazepine is a CYP3A inducer, and would be less likely to result in decreased metabolism of hepatically-modified opioids.

B) Phenytoin is a CYP3A inducer, and would be less likely to result in decreased metabolism of hepatically-modified opioids.

C) St. John’s wort is a CYP3A inducer, and would be less likely to result in decreased metabolism of hepatically-modified opioids.

D) Rifampicin is a CYP3A inducer, and would be less likely to result in decreased metabolism of hepatically-modified opioids.

E) Diltiazem is a CYP3A inhibitor, and would be the most likely drug in the given selection to result in decreased metabolism of hepatically-modified opioids.

BoardVitals NBDE II Question Bank has hundreds of questions targeted to the National Board Dental Exam 2. Click here for a free trial.