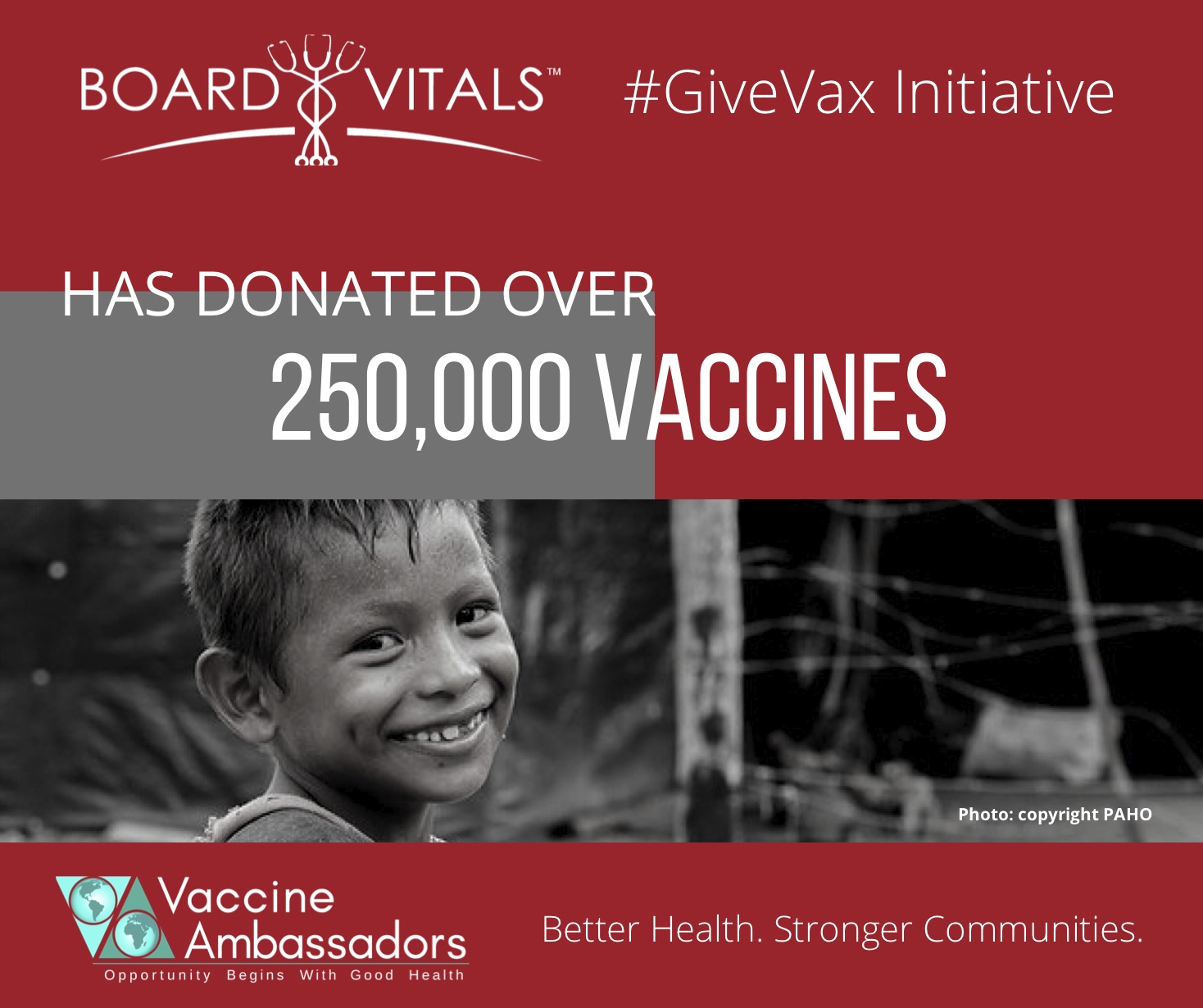 In the spring of 2016, BoardVitals launched its #GiveVax initiative with noted vaccine charity Vaccine Ambassadors. The name was a play on “giving back,” and “giving vaccines.” Now, three and a half years later, the #GiveVax initiative is celebrating an incredible milestone: the support of over a quarter of a million vaccines to protect children and families in Latin America and the Caribbean.

“I continue to be inspired, and quite honestly in awe by the impact that one company with the right leadership can have on so many individuals and their community,” states Jackie Kaufman, Executive Director of Vaccine Ambassadors.

This has been a particularly crucial year in the Pan American Region. There has been a resurgence of vaccine preventable-diseases due to economic instability and strained healthcare systems. The ongoing commitment from BoardVitals has been instrumental in extending our reach during this critical time.

“I believe that dollar for dollar, vaccines save more lives and prevent more suffering than any other initiative that we could invest in. We decided as a company to set aside a portion of every purchase to go to this important cause. I am grateful to the team at BoardVitals, who have worked hard to make this program a reality,” says Daniel Lambert, CEO of BoardVitals.

This year, Vaccine Ambassadors participated in a large-scale campaign in Haiti to vaccinate 1.5 million children under the age of five with the measles-rubella vaccine. The vaccine charity also provided funds to help strengthen the National Immunization Program in Haiti with the pentavalent vaccine (covering 5 different diseases with one injection). Earlier in the year they provided the quadrivalent influenza vaccines to be used in Colombia, as healthcare systems have been strained by mass migration. Vaccine Ambassadors also funded the purchase and delivery of vaccines for infants in Venezuela.

“I can unequivocally state that we would not be able to reach as many people if it were not for this incredible partnership,” says Vaccine Ambassadors’ board member, Lisi Martinez Lotz.  We hope that you will join them in celebrating this amazing achievement.

Wondering what 250,000 looks like in terms of New York landmarks? Next time you’re in the Big Apple, take a look around!

“Vaccines donated” is an estimated calculation based on current contributions translated into the average price of a vaccine. Vaccines vary by price depending on the type and manufacturer. By working with partners determining priority areas of need, Vaccine Ambassadors can maximize its impact.

Jackie Kaufman, Co-founder and Executive Director of Vaccine Ambassadors, has been involved in health care for over 25 years as a nurse and adult nurse practitioner. Her early clinical specialty areas include cardiothoracic intensive care, emergency room medicine, and organ donation and transplantation.   She practiced clinical care and research with the HIV/AIDS Clinic Trials Group at the University of North Carolina, Division of Infectious Diseases. She also served as Project Coordinator for the CDC funded, Global AIDS Program in Kinshasa, Democratic Republic of Congo through the University of North Carolina, School of Public Health, Department of Epidemiology. She received both her BSN and MN from the University of Washington, Seattle. Her other public health interest includes efforts to reduce and prevent violence. Over the past decade she has served on several local and state organizations addressing this issue, for which she has received numerous awards.
More from this author