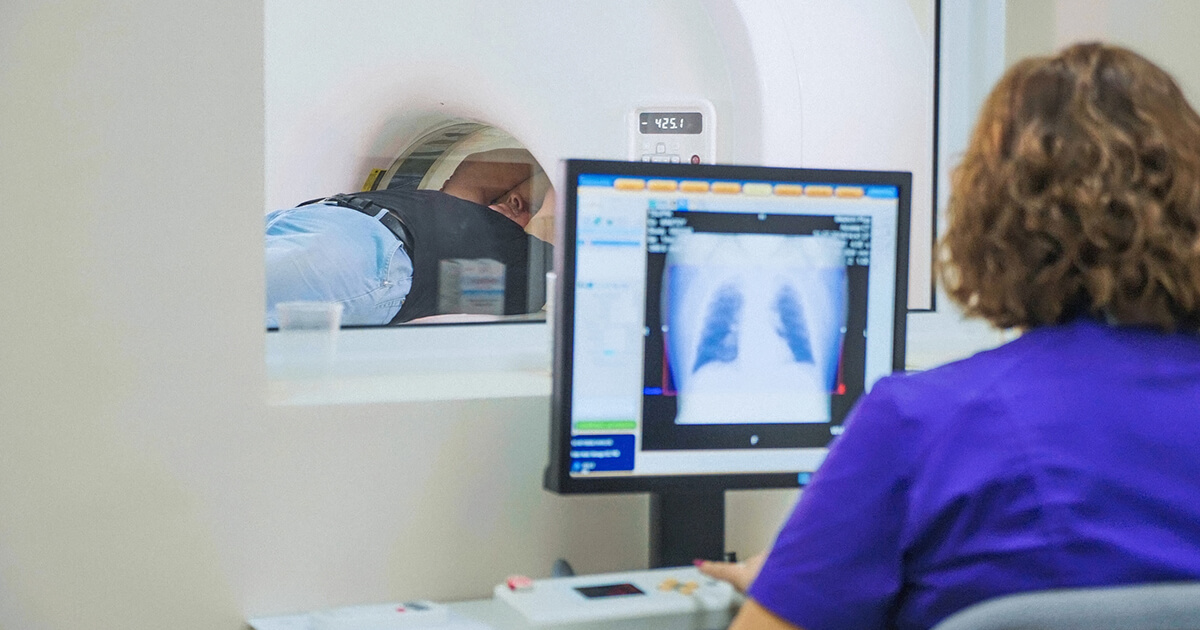 The Radiology CORE Exam is the first exam you will take on your road to become a Radiologist testing you on key concepts related to radiology as well as physics. This complex exam lasts for two days, and can be an exhausting endeavor for test takers. Be ready for the boards by taking sample questions to identify weak spots. See where you stand with these sample Radiology CORE Review Questions from BoardVitals.

Which of the following artifacts is displayed on the ultrasound image?

A) Incorrect. Side lobes artifact is created by detection of low-amplitude ultrasound waves, which project radially from the main beam axis. These detected waves will erroneously place objects outside of the field of view onto the image. This is commonly seen as abnormal signal in anechoic structures such as the urinary bladder or gallbladder.

B) Incorrect. Mirror image artifacts occur when the beam encounters a highly reflective interface. Echoes are reflected from the interface back towards the transducer, but then encounter the “back” of a structure, are reflected back to the original reflector and then reflected back to the transducer. This results in a duplicated structure or “mirror image.” This commonly occurs at the diaphragm.

C) Incorrect. Speed displacement artifact occurs when the velocity of sound is decreased below the assumed 1540 m/sec due to an attenuating lesion resulting in a delay of the returning echo. The image processor will erroneously place the tissue posterior to the attenuating lesion deeper than they are truly located.

D) Correct. Reverberation artifact occurs when two parallel highly reflective surfaces repeatedly reflect the beam back and forth before returning to the transducer at different times. These delayed echoes will be shown as multiple linear reflections, which are equidistant from each other.

A 28 year old male had a fall from a 30 foot height. Before being intubated due to hypotension, he reported extreme right sided pelvic pain. Trauma series pelvic radiograph and an axial CT image from a trauma pan-scan are shown. In addition to IV fluids and pelvic stabilization, what would be the next step in management?

As seen on the radiograph performed with the patient on a trauma board, the patient has sustained a vertical shear type pelvic fracture on the right. This is evidenced by the (bilateral) sacral fractures and the craniocaudad translation of the right pubic rami fractures relative to each other. The most common mechanism for this fracture is fall from a height, as was the history in this case. The axial CT image demonstrates extensive extraperitoneal hematoma, both adjacent to the sacrum and extending anteriorly such as anterior to the iliac vessels and iliopsoas muscles. Pelvic bleeding in patients with pelvic fractures may be arterial, venous or through the marrow (“bone bleeding”), with the most concerning obviously being arterial bleeding. In cases of hemodynamic instability, the patient is resuscitated with fluid (and blood), undergoes stabilization of the pelvic fractures (such as with external fixation) and undergoes angiography to embolize arterial bleeding. Whether to perform orthopedic stabilization or angiography first is variable, with some maintaining that orthopedic hardware may obscure angiographic imaging so angiography should be performed first. Open surgery for extraperitoneal bleeding is only done in patients who remain persistently unstable. CT guided catheter placement is not performed as the presence of hematoma partially tamponades potential additional bleeding. Radiography of the lower extremity is indicated in patients with falls from heights who commonly sustain other fractures such as pilon fractures, talar fractures and calcaneal compression fractures; however, in hemodynamically unstable patients, hemodynamic stability must be accomplished first.

5 of the Most Overlooked Topics on the Radiology Core Exam