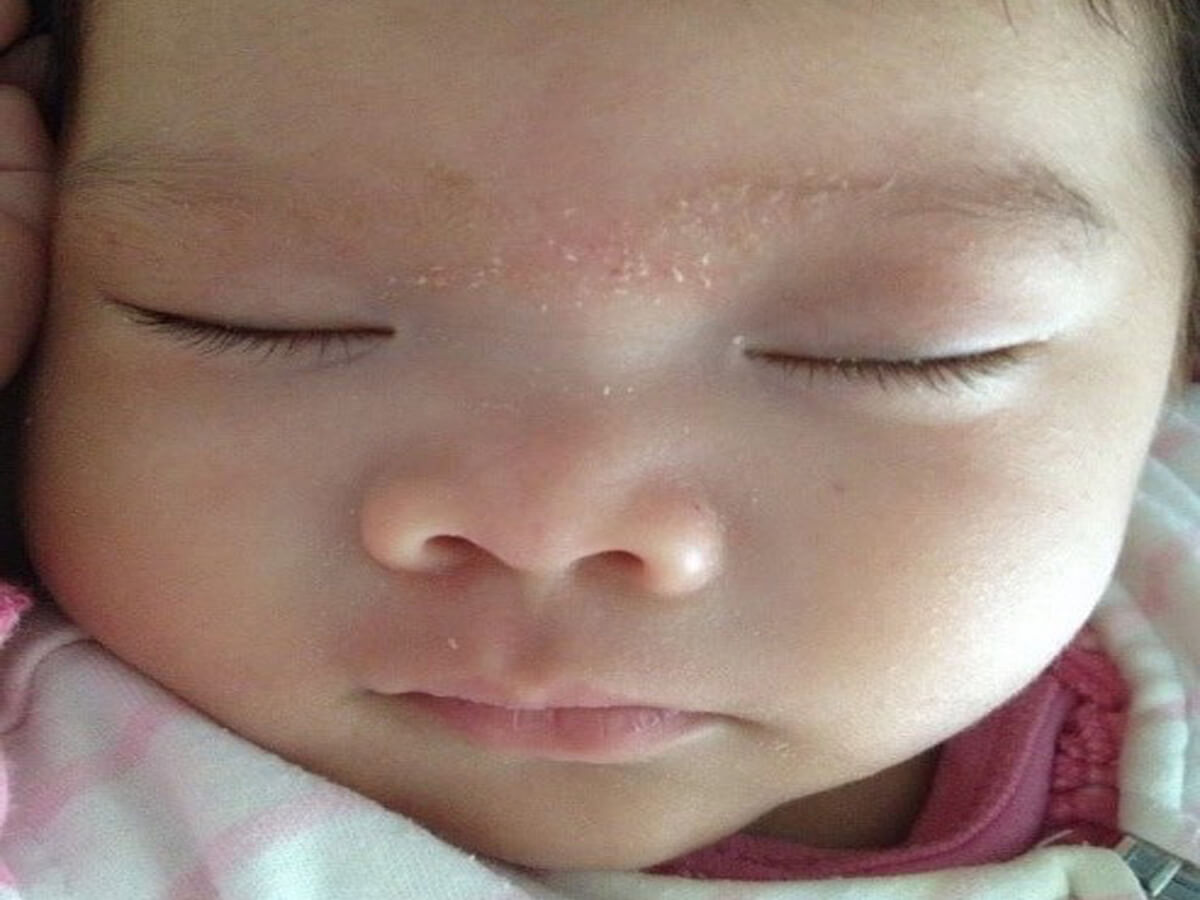 The pass rate of the Pediatrics Board Exams seem to vary year to year. Some years, we’ll see rates of 78%, and other years the pass rates are in the nineties.

In Specific regards to the test, the examination consists of multiple-choice questions. Candidates should check out the ABP tutorial on abp.org and also read the Prometric Testing Center Regulations in advance. In terms of textbooks, we’ve heard good things about the Kaplan Medical Master the Boards book for Pediatrics. Naturally, we suggest using question banks to really drill the concepts. Below are sample Pediatric Board Review Practice Questions. There’s no better way to study for the boards than going through a series of challenging board-level questions.

A mother brings her 16-day-old boy to your office because she is concerned about a rash on her baby’s eyebrows. She first noticed it yesterday and it seems slightly worse today, which concerned her and her mother-in-law. She tried bathing the baby but that did not help. Her son does not seem bothered by the rash. He was a full-term vaginal delivery weighing 7 pounds 4 ounces and was observed for 48 hours in the hospital after delivery due to inadequately treated group B strep colonization in the mother but discharged without concerns. He is exclusively formula-fed. What treatment would you recommend?

A. Topical corticosteroids
B. Topical antifungal
C. No treatment is necessary
D. Switch to a soy formula
E. Regular evaluation as there is an increased risk of basal cell carcinoma within this area

Answer: C. No treatment is necessary.

A: This image is an example of seborrheic dermatitis, which most commonly appears on the scalp but also can be found on the eyebrows, base of eyelashes, nasolabial folds, and posterior auricular folds. The cause of seborrheic dermatitis is unknown but it has been hypothesized that it is an inflammatory response to Malassezia furfur. Seborrheic dermatitis can be differentiated from eczema because of the greasy yellowish scale, as present in the picture. Topical corticosteroids are helpful for many common cutaneous lesions including eczema, lichen planus, and psoriasis. While seborrheic dermatitis will resolve following the use of a low-potency topical corticosteroids, their use is only recommended for significantly inflamed lesions due to the possible side effects such as hypopigmentation and thinning of the skin.

B: Topical antifungals, such as miconazole, clotrimazole, and ketoconazole, are useful for treating superficial fungal infections, such as tinea corporis, tinea pedis, tinea cruris, and tinea versicolor. These are caused by Microsporum, Trichophyton, or Epidermophyton. Tinea corporis, also known as ringworm, presents as a pruritic annular plaque or papule that expands outward with a raised ring of erythema and scale surrounding a central area of clearing. Tinea pedis, also known as athlete’s foot, presents with fissuring, scaling, and cracking of the skin between the toes and dorsum of the foot. Tinea cruris, also known as jock itch, presents as a scaly erythematous patch on the inner thigh and is unusual in infants and children. Tinea versicolor presents as scaly, oval, hyperpigmented or hypopigmented macules most commonly on the upper chest, back, or arms. Another topical antifungal, nystatin, can be used to treat candidiasis, which most commonly causes erythematous plaques with satellite lesions in the diaper or intertriginous areas.

C: Seborrheic dermatitis is a chronic inflammatory disease that can appear anywhere on the body but most commonly occurs on the scalp, eyebrows, base of eyelashes, nasolabial folds, and posterior auricular folds. In infants, seborrheic dermatitis typically presents as “cradle cap” and in adolescents and adults as dandruff. Cradle cap is asymptomatic and, while it often begins in the first month of life, cradle cap may persist throughout the first year of life. The characteristic feature of cradle cap is the thick, waxy, yellow or white scaling and crusting with greasy adherent scale. Occasionally a nonpruritic, erythematous, papular dermatitis may also appear on the face and diaper area. Seborrheic dermatitis does not require treatment but it may be controlled by gentle brushing to remove the scale or shampooing with zinc pyrithione, selenium sulfide or salicylic acid to treat the scaling on the scalp.

D: Feeding with soy formula is not recommended for the prevention of atopy, even in infants at high-risk, as there is no proven value. Soy formulas are also not recommended for infants that have milk protein-induced enterocolitis because 30-60% will also have a concomitant soy-protein enterocolitis, thus hydrolyzed protein formulas should be used instead. The recommendations for switching from a human milk or cow-milk formula are for infants that have galactosemia or primary lactase deficiency or for infants of families that wish to avoid animal products.

E: A sebaceous nevus, also known as nevus sebaceus of Jodassohn, is a congenital, well circumscribed linear or round plaque that is typically present at birth on the face or scalp. On examination, a sebaceous nevus will appear as a hairless yellow-orange or tan plaque that is smooth or velvety. In adolescence, as a result of hormonal influence, the lesion becomes verrucous and nodular. They are hamartomatous lesions that are composed of sebaceous glands and up to 10% will undergo malignant transformation, most commonly basal cell carcinoma.

A 28-week gestation male was born 4 days ago to a G3P3 mother who had an emergency C-section due to placenta previa. He is being ventilated with high pressures for respiratory distress syndrome. On physical examination his breath sounds are symmetric and he has a grade III/VI systolic heart murmur. An echocardiogram is obtained to evaluate the murmur and a patent ductus arteriosus is identified. The medical student that you are working with asks what treatment option for the patent ductus arteriosus will improve neurodevelopmental outcomes in childhood for this baby. Your best response is:

A: The ductus arteriosus serves an important role in fetal life by connecting the pulmonary artery and descending aorta, serving to direct ventricular output away from the fetal lungs and towards the placenta. While the ductus arteriosus may remain patent for the first several days of life, rising arterial PO2 causes constriction of the muscle in the wall of the ductus, leading to closure. After 48 hours, most PDAs in term babies will be closed and in uncomplicated preterm babies (typically greater than 27 weeks) with minimal respiratory problems, the ductus arteriosus closes in the same time frame. However, in approximately one-third of babies born before 30 weeks the ductus arteriosus fails to close. Signs of a patent ductus arteriosus (PDA) are a long systolic murmur at the upper sternal edge, bounding peripheral pulses, increased pulse pressure, and increased precordial cardiac impulses, although not all PDAs will have physical signs. A PDA can lead to left-to-right shunting and have multiple consequences, including pulmonary edema, chronic lung disease/bronchopulmonary dysplasia, heart failure, intraventricular hemorrhage, necrotizing enterocolitis and death. Indomethacin is a nonspecific prostaglandin synthetase inhibitor that has classically been used in neonatology to close PDAs because it is successful 75-90% of the time. Risks of indomethacin use include oliguria, gastrointestinal bleeding and perforation, hyponatremia, and transient reductions in blood flow to organs. Current research, however, does not show any improvement in long-term neurodevelopmental outcomes and many of the risks of a PDA can be accounted for by the immature gestation.

B: A ductal left-to-right shunt will create an increase in pulmonary blood flow and, in the setting of preterm respiratory distress, can lead to pulmonary edema and decreased lung compliance, which in turn can prolong the duration of artificial respiration that is needed, increase the oxygen need. For these reasons, surgical ligation of a PDA is often used when a symptomatic PDA has failed to close with medical treatment. Unfortunately, neonates that undergo PDA ligation have higher rates of pneumothorax and retinopathy of prematurity and studies have not shown that ligation after failed medical treatment protects babies from adverse outcomes.

D: Recently trials comparing indomethacin with another prostaglandin synthetase inhibitor, ibuprofen, have shown similar efficacy of PDA closure with less negative effects on organ blood flow and reduced incidence of transient renal side effects. However, neither indomethacin nor ibuprofen use are associated with improved neurodevelopmental outcomes when used in treating a PDA.

E: Timing of PDA treatment, when performed, occurs at one of three points: prophylactic treatment, targeted presymptomatic treatment, or when the ductus arteriosus becomes clinically symptomatic. Although many symptomatic PDAs are treated, there is no evidence of any benefits in terms of outcome, including chronic lung disease and mortality. Studies looking at prophylactic treatment of a PDA utilizing indomethacin to high-risk neonates within the first 24 hours have shown reduced incidence of PDA ligation, grade 3 or 4 intraventricular hemorrhage, and periventricular leukomalacia. Despite this, neurodevelopmental outcomes at 2 years of age are not improved, thus there is no long-term advantage despite the short-term advantages.

The Board Vitals Pediatric Question Bank has over 1,400 Pediatric review questions to help you prepare for the Board Exams and MOC. Click here for a free trial.

Can you answer these 4 Pediatrics Practice Questions?