The Pathology Board Exam is a notoriously difficult test. In some years, Pathology board pass rates have been as low as 68%. This is a significantly lower rate than many of the other exams.

We suggest several textbooks for the Pathology Boards: McGraw-Hill Specialty Board Review Anatomic Pathology as well as the Lefkowitz book. We feel that the best way to prepare, though, is by practicing with what will be on the exam. Test your knowledge with some of our Pathology Board review practice questions.

A 57-year-old male presents with fatigue and left upper quadrant heaviness. His white blood cell count is 110 x 109/L, and his hemoglobin is 8 g/dL. A bone marrow biopsy is performed, and in addition to a marked increase in neutrophils and precursors, a rare cell such as the one depicted here is present. What is this cell? 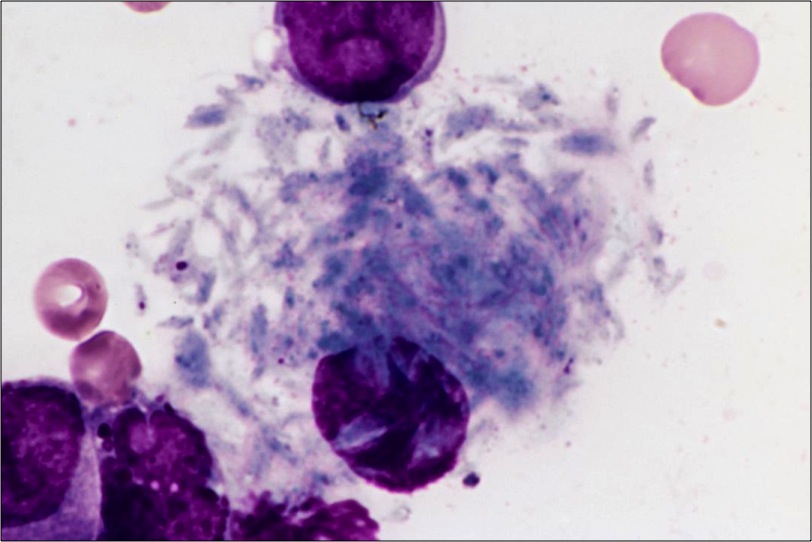 Pseudo-Gaucher cells are histiocytes with pale blue, needle-like inclusions. They are designated as pseudo-Gaucher cells because they resemble the foamy, glucocerebroside-stuffed macrophages characteristic of Gaucher disease. These cells are occasionally seen in chronic myeloid leukemia, as was the case in this patient. They have also been described in other various hematologic disorders, such as myeloma, lymphoma, myelodysplastic syndromes, and thalassemia.

A. Incorrect. Although malignant plasma cells may take on many different appearances, including cells containing Dutcher bodies and Russell bodies (both of which contain immunoglobulin), and cells with a flame-like cytoplasmic appearance (particularly in IgA myeloma), they do not contain needle-like cytoplasmic inclusions.

B. Incorrect. Megakaryocytes are large cells, like the pseudo-Gaucher cell seen here. However, they do not contain the needle-like inclusions seen in pseudo-Gaucher (or Gaucher) cells.

A 30-year-old African American female weighing 55 kg with a history of hemoglobin SS, not transfused within the last 9 months presents to the emergency room with left sided weakness. Current hemoglobin is 7 g/dl, with a hematocrit of 21% (her baseline hematocrit is 27%). Her physician requests a red blood cell exchange, but is unsure how many units of packed red blood cells to order. He states that he wishes to get her hematocrit back to baseline. How many units of packed red blood cells will you tell the physician to order for a red cell exchange procedure?

The physician in this case is ordering a red cell exchange because it has been shown that the red blood cell exchange transfusion rather than simple transfusion decreases the risk of recurrent stroke. (Simple transfusion at the time of stroke presentation resulted in a 5-fold greater relative risk of second strokes compared with exchange transfusion at the time of stroke). Suggested goal parameters for exchange transfusion in the treatment of acute stroke include hematocrit of 30 +/- 3% and hemoglobin S of 30%, which is what the physician in this case was trying to achieve. In our case when determining the number of units required one would begin by calculating the total blood volume (TBV), which is calculated by Wt (kg) x 70 cc/kg and in our particular case our patient weighs 55 kg (55 x 70) and therefore has a total blood volume of 3850 cc. At this point we may calculate 1 red cell volume (RCV) for the patient by hematocrit x TBV (0.21 x 3850) which is 808 cc for one RCV. One would then calculate the number of units for 1 RCV, taking into account that the volume of red cells in one unit after the additive solution, and reduced plasma are removed is around 180 cc., therefore RCV/ unit (808/180) = 4.5= 5 units. The physician also request that the hematocrit be brought back to her baseline of 27%, this may be accomplished by the following formula: desired % hematocrit increase/ 3%. In this case (27-21)/3 = 2 units. Therefore the number of units for 1 RCV exchange + additional units to increase hematocrit to 27 % would result in 7 units to order from the blood bank.

The BoardVitals Pathology Question Bank has over 1,000 Pathology Board review practice questions to help you prepare for the Board Exams and MOC. Click here for a free trial.