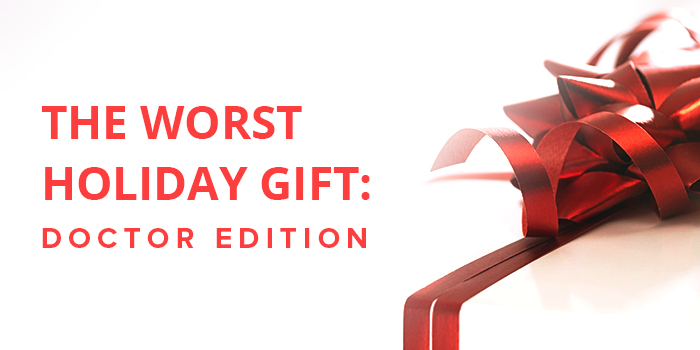 The holidays are not only full of cheer for doctors but also some hilarious gifts. We asked the question “What Is The Worst Gift You’ve Ever Received?” to doctors around the nation.

Here are some of the worst gifts… The first patient I ever saw post-residency had chronic dental pain (around the site of his last remaining tooth!) He was one of our “frequent fliers” in the emergency department. After a couple of years of seeing him for pain around his only tooth, he came in one December and gave it to me in a Ziploc bag. It had fallen out. He said, “I wanted you to have this because you have worked so hard to save it all of these years. Merry Christmas.” The worst gift was a five pound box of See’s Candies – popular in Los Angeles. When it came, we – the office staff – looked at it in horror. We knew that if we opened it, tragedy would occur.

We knew that once opened, we would be struggling with our worst demons.

The one that says, “Just one won’t hurt you.”

The one that says, “Who knows? You might get struck by a car tomorrow. LIVE today.”

The one that says, “You deserve it.”

We made a pact! We decided that this was the worst that could happen to us. Just then the friendly postman came in and smiled a happy holiday smile. With absolute coordination, all of us reached for the box, lifted it, and simultaneously as though in a chorus, handed him the box and sang “Merry Christmas to you.”

Though this should have a happy ending, it does not.

No, he didn’t eat the candy and develop diabetes. Worse than that.

No he wasn’t shot on a robbery as someone stole the box. Worse than that.

He was so delighted with the gift, that he strolled over to the pharmacy in our building and showed the box to the pharmacist and praised Dr. Grossan for being such a nice, swell guy.

It was the pharmacist that had given us the chocolates! The worst present I ever got was a video from an anonymous person on “how to tone your body and lose weight”. That is the last thing you want for Christmas. When I was eight years old, I received a tin of butter cookies and a birdhouse. Although a sweet gift, I was only eight years old and really wanted a doll. One of my patients is an international importer and he brought me a giant chunk of smelly cheese from Italy. The worst gift I have ever received was a fruitcake filled with processed preservatives. Quote: My Grandfather from Germany always liked to buy the cheapest presents possible for us for the holidays because his passion was finding the best deals.  One Christmas, my grandpa mailed me a bicycle. We lived on a very steep mountain and I decided to ride the bike down the mountain into town.  I went straight down the highway and when I was starting to pass the cars on the highway I pressed on the brakes –  which at that point broke into pieces because it was so cheap!

What’s the worst gift YOU have ever received? We hope you receive the best of all gifts this year – health and happiness.

All of us at BoardVitals wish all of you Happy Holidays!

Coping with Holiday Stress in Healthcare

What Are Doctors and Nurses Most Thankful For In 2016?