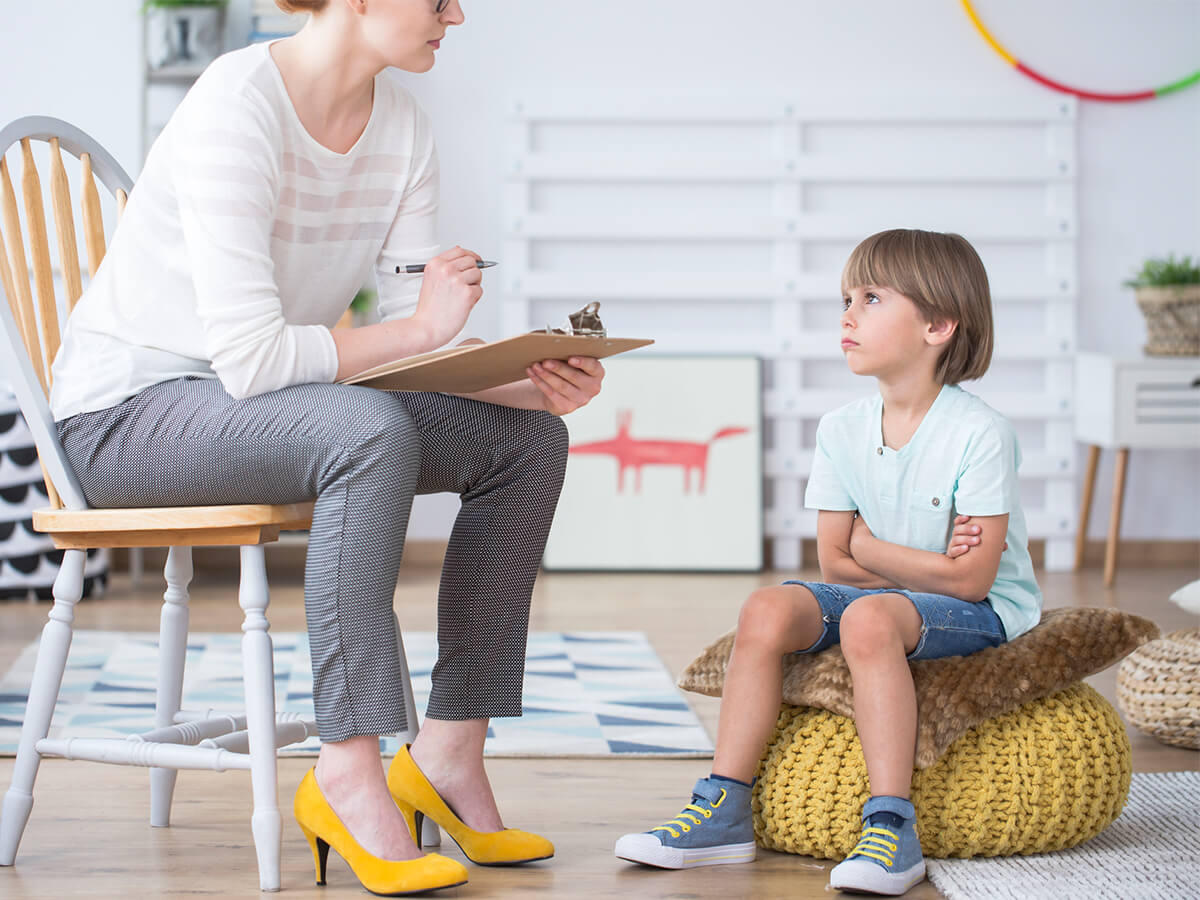 Anxiety disorders have the earliest average age on onset at six years. When anxiety is left untreated in childhood, it can persist into adolescence and adulthood and is associated with higher rates of mood disorders, substance abuse and occupational difficulties. The major types of anxiety are generalized anxiety disorder (GAD), social anxiety disorder, panic disorder, and specific phobia.

A good initial evaluation by a psychiatrist is needed to properly diagnose and treat a childhood anxiety disorder. In many disorders, parental anxiety or parental accommodation will cause this disorder to persist even when treated with therapy or medications. The mainstay of treatment is therapy, specifically cognitive behavioral therapy, and medications (typically SSRIs such as fluoxetine or escitalopram).

Behavior disorders are the second most common disorder as rated by the NCS with a prevalence of 19.1%. Attention Deficit Hyperactivity Disorder (ADHD) is the exemplar of this class. Average age of onset is 11 years old although the most obvious cases usually present at age 5-6 with the onset of Kindergarten.

The key elements of diagnosis are the cardinal criteria outlined in surveys that have become the gold standard of the diagnosis of ADHD. The Vanderbilt Scale has been extensively tested, is available in English and Spanish and briefly covers mood disorders. Having a teacher and parent fill out a Vanderbilt does not excuse the clinician from performing a clinical exam.

Behavior disorders, although statistically more likely to be ADHD, may later turn out to be a depressive or anxiety disorder on further exploration. Externalizing behavior (for example acting out, hitting, running away and ‘defiance’) may turn out to be expressions of sadness or anxiety.  The mainstay of treatment for ADHD is stimulants although alpha agonists and agents such as atomoxetine are also effective.

Depression is the third most common disorder according to the NCS study with a reported prevalence of 14.3%. Mood disorders have their typical onset at about age 13, or late middle school. About 40% of children and adolescents with depression are not treated.

The PHQ-9A or the Patient Health Questionnaire Adolescent version is an evidenced based screening tool that also can be used also to monitor treatment response.  Severe depression is indicated at a PHQ-9A score of above 20 and typically responds best to psychotherapy and medication treatment.

If a youth presents with suicidal thinking, particularly if they have plans to harm themselves, they typically warrant involuntary hospitalization. Involvement with the family is necessary and school involvement is often helpful. In patients with moderate to severe depression the preferred treatment is medication and either cognitive behavioral therapy (CBT) or interpersonal therapy (IPT). Preferred medications are the FDA approved treatments of fluoxetine and escitalopram. 60% of youth respond to initial treatment with an SSRI. Adjunctive treatment with some established benefit includes exercise and omega-3 fatty acids (fish oil). Predictors of nonresponse include: suicidal ideation with a plan, long duration of illness, presence of self-injurious behavior, co-morbid psychiatric disorders, presentation at a young age, severe psychosocial stressors, mental illness in a parent and family conflict. To prevent relapse, the minimum recommended time of medication treatment is six months, and the preferred time is 12 months. Major side effects to be aware of are suicidal thinking and mania. Mania is more common in teens who present with depression before the age of puberty and have a family history of bipolar disorder. The FDA recommends seeing patients weekly for the first month after being started on SSRI’s due to these risks.

According to the NCS, addictions are the fourth most common psychiatric disorders in children, with a prevalence of about 11.2.%. Substance abuse disorders typically present around age 15, or high school age. According to a national study, the most common drug of abuse within the 12-17 year range is marijuana (65.5%) followed by alcohol (42.9%) and then prescription drugs at (38.7%). Most youth don’t go on to develop dependence, but, certain factors such as genetic predisposition, early use of substances, childhood stress and trauma, environmental factors as well as temperamental factors (risk taking, impulsivity) increase the risk of a youth developing drug dependence. 15.2% percent of of people who start drinking by age 14 will develop alcohol abuse or dependence. Cannabis has made a huge resurgence and it is worth noting that chronic use in adolescents is associated with a permanent decrease in IQ in adulthood as well as increased risk of psychosis in people who have a family history of schizophrenia. There is a huge need for primary prevention in addictions as well as a reallocation of funding to address cannabis abuse and dependence as many insurance companies don’t pay for treatment if the drug of abuse is cannabis.

The treatment needs of youth vastly differ from that of adults. Youth are more likely to receive treatment for cannabis abuse as compared to adults. Adolescents are also less likely to feel that they need treatment and typically are less engaged. Only about 10% of youth with substance abuse issues receive treatment and the largest referral source is the juvenile justice system. The National Institute on Drug abuse has encouraged the Brief Screener for Alcohol, tobacco and other drugs or BASTD.

Autism or Autism Spectrum Disorder (ASD) is a diagnosis that characterizes a broad range of clinical manifestations linked by impairments in social communication, social interaction and restricted and repetitive patterns of behavior.

Children later diagnosed with ASD typically have limited social attention, poor joint attention and delays in nonverbal communication. A lack of social attention may present as a child who typically plays alone due to an inability to engage in age appropriate play. Poor joint attention may manifest as a lack of eye contact as well as lack of interest in a shared activity. Deficits of nonverbal communication may manifest as awkward or absent gestures or speaking in an unemotional and/or monotonous voice that is devoid of the typical emotional range.  A well established screening survey is the M-CHAT-R.

Early intervention with a multidisciplinary team is essential (physician, psychologist, geneticist, speech pathologist, occupational therapist and an audiologist). The most popular evidence based intervention is functional behavioral analysis. If there is not severe irritability and aggression, it is advised that medication treatment begin with addressing co-morbid conditions such as anxiety and ADHD. SSRIs and stimulants used to treat anxiety and ADHD respectively may decrease mild irritability and aggression. Irritability and resultant aggression is typically treated with the FDA approved antipsychotic medications (aripiprazole and risperidone). It is advised to monitor weight and BMI at each visit and labs (CBC with diff, CMP and lipid panel) prior to starting treatment as well as at regular intervals (3 months, 6 months and then yearly thereafter).

BoardVitals has in depth content covering all of the above areas written by adult and child psychiatrists.  With a subscription, you can learn the information efficiently using questions to test what you know now. In-depth explanations, also written by experts in the field, provide the background information and context with citations from top journals and textbooks.

Sean Paul, MD is a Dual Board Certified Child/Adolescent and Adult Psychiatrist. He specializes in treating patients of all ages with mental health issues as well as a specialization in video game and internet addiction.
More from this author