The History of White Nurse Uniforms 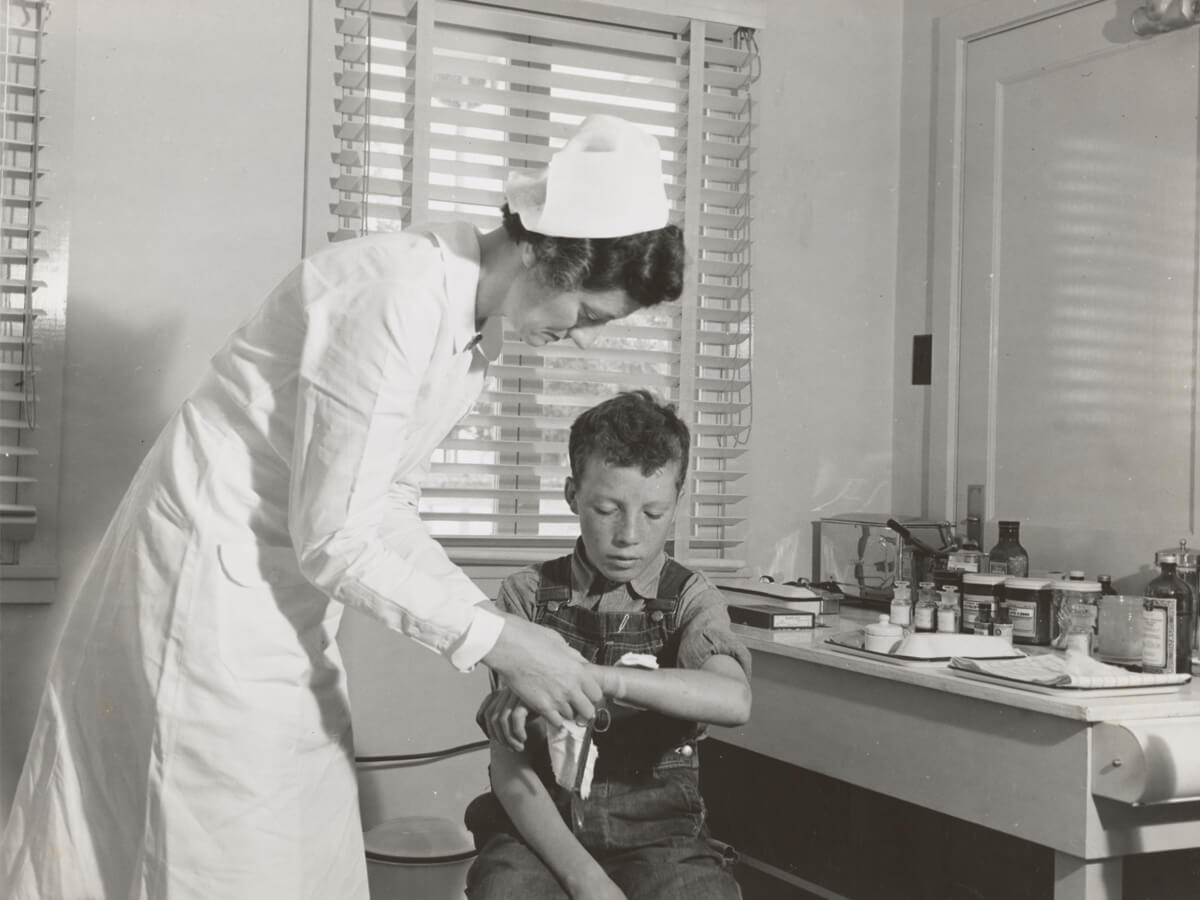 Nurse uniforms have been slaves to fashion for centuries. It began with Florence Nightingale’s nurses – the first to wear uniforms – and continued until the 1980’s when the wearing of scrubs became common practice. The advent of white uniforms may have presented an air of professionalism and commanded respect, but it was far from practical. Wearing white while caring for very sick patients was no walk in the park. Let’s hear it for easily laundered, easily replaced scrubs.

The one common thread across the centuries of nursing is that an air of professionalism has always been the driving force behind the uniform. Florence Nightingale was the first one to understand that a uniform was key to commanding respect. She gave her nurses layers of gray; gray tweed dress, gray worsted jacket, plain white cap, and short woolen cloak. Not only did she want to protect them from infection, she also wanted to protect them from the advances of the young soldiers in their care. Her nurses also wore hats with colored bands that indicated their level of experience; pastel colors for young nurses, black bands for senior nurses.

As the nursing profession advanced, so did the uniform, but it remained a slave to fashion and reflected the dresses of the time. For example, in the late 1800’s, nurse uniforms had leg-o-mutton sleeves; tight up to the elbow with a huge bulbous shape extending from the elbow to the shoulder.

By the 1900’s, white was the primary color used because it was considered to look clean, sanitary, and scientific. In the early part of the century, nurse uniforms began as a white apron with a bib that extended up and over the shoulders. The waistbands looked impossibly tight, as did the dresses worn under them. But, that was the fashion of the time and it reflected the boned corsets that women wore under all their garments. Some nurses in Europe began wearing high hats and veils that resembled nuns’ habits, but that was never adopted in the US. (Can you imagine dealing with a veil while bending over caring for patients!?)

In the early 1900’s, capes were worn for warmth while treating soldiers outdoors, but it was adopted as a signature of nursing uniforms year round. Red Cross nurses always wore a navy blue cape with a red lining as part of their uniforms. During World War I, capes identified the country, organization, and hospital of the nurse. Public health nurses that frequently worked outdoors wore the capes for protection from the elements. Navy nurses continued to wear capes until the 1930’s when the use of blue sweaters over a white uniform was adopted.

By the beginning of WWI, nurses’ uniforms were being simplified, and made more practical. Skirts were shortened a bit so nurses could move faster on the field of battle, sleeves were shortened, and pockets were added to aprons for practicality. However, aprons were still white, and still showed the signs of every wound, surgery, and infection that nurses cared for during their shift.

Over the course of time, hemlines and sleeves continued to shorten, skirts narrowed, aprons were eliminated and the starched white dress and hat were adopted. That brought its own complications. By the 1960’s, the nurses uniform was comprised of a starched white dress, white cap, white nylons and white shoes. Keeping them clean was a job on its own. Some hospitals laundered the white uniforms for nurses. However, other nurses were faced with bleaching and starching blood and bodily fluids out of their uniforms; a sometimes difficult and costly task. Shoes had to be polished and shined nightly.

White hats were part of nurse uniforms as well. By the 1950’s, nurse hats were made of paper. They were an important part of graduation and the capping ceremony at nursing school. Stripes on the hats indicated the school of nursing from which the nurse graduated. However, they too were problematic and many fell off onto (and into) patients. By the 1970’s, hats were eliminated as part of the nurse’s uniform.

There is some discrepancy on how scrubs came to be the uniform for all healthcare providers. Some say that as men began to wear them women fought for the right to wear them as well. Others say that women got tired of wearing skirts that would ride up while they were pushing gurneys, and white clothing that was covered with blood and bodily fluids by the end of their shift. Whatever the reason, by the 1970’s and 80’s nurse uniforms unofficially became scrubs because they are more practical, comfortable, easier to clean and replace, and had pockets to carry tools. They are also appropriate for either gender.

Nowadays scrubs have more styles, features, colors and versatility that nurses can choose to personalize their tastes and needs.

It’s been a long path from corseted nursing uniforms to scrubs. Nursing is demanding and fast paced to say the least. Who wants to go through a 12-hour shift wearing whale bone corsets and gray wool ankle length skirts? It was a long road, but we finally landed in a reasonable and functional place.

How to Nail Your Nursing Interview