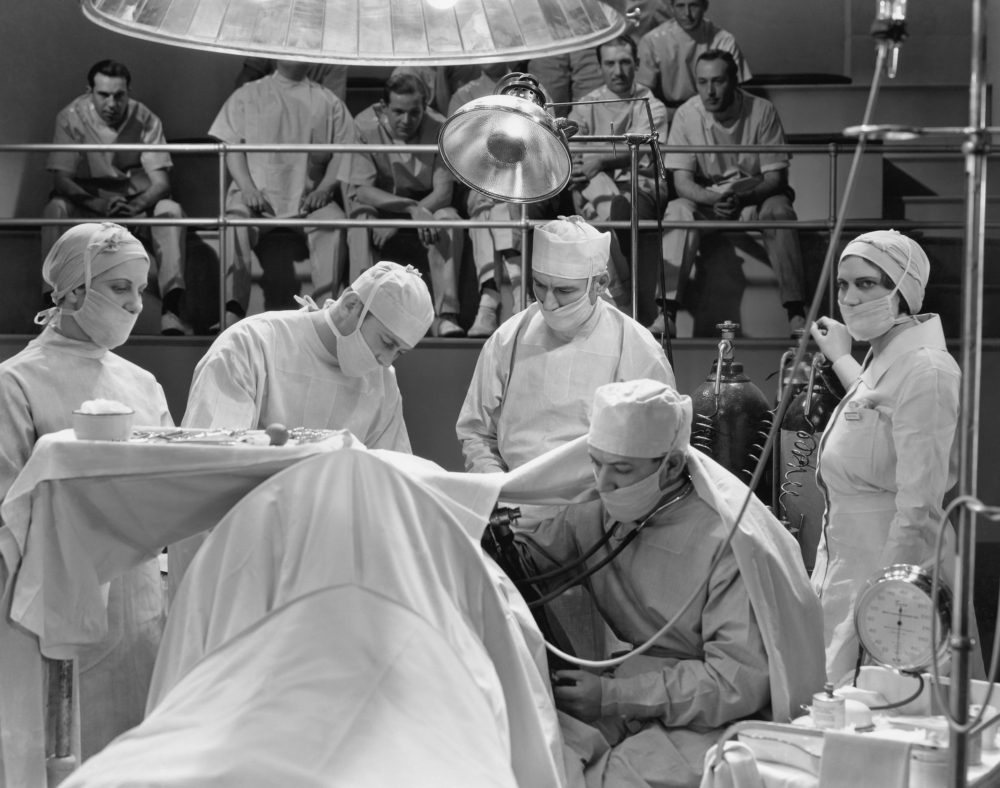 In honor of Doctors’ Day, we would like to remember the great physicians who paved the way for modern medicine. This is no small task, given the number of physicians who have changed medicine with their research, discoveries, and inventions. To narrow the field we have focused on the seminal achievements of a few physicians in the 19th century. That time period is the crosswalk between so-called “heroic” medicine that believed in bloodletting and modern medicine that stressed diagnostics. Here’s the story.

The turn of the 19th century was an exciting time; the steamboat, cotton gin, and locomotive were invented, railroads and textile mills were being built, society was on the move and yet medical practices differed little from those of the 18th century. Physicians believed that all disease was one disease caused by an overstimulation of nerves and blood. “Heroic” medicine was the cure and it involved bleeding, blistering, purging and vomiting to restore “natural balance”.

From autopsy to surgery – in the same coat

Infection was rampant in “heroic” medicine. The University of Toledo reports that surgery was “performed with no regard for cleanliness and doctors wore filthy coats from the autopsy room to the operating room with pride.” Septicemia and gangrene were regularly spread to patients and the only anesthetics were opium and alcohol.

To France and back for advanced medicine

Around 1820, the French Clinical School was established and it emphasized clinical and pathological observations – the first diagnostics – to determine the best treatments. Doctors collected statistical evidence from patients like temperatures and pulse rates. Approximately 700 American doctors traveled to that school between 1820 and 1860 and brought the practices back to the US.

Here are some of the physicians who changed 19th-century medicine in America: Ignaz Philipp Semmelweis (1818-1865) was a Hungarian physician who is considered the early pioneer of antiseptic procedures – specifically hand washing. He discovered that the incidence of the often fatal puerperal fever (“childbed fever”) could be drastically cut by the use of hand disinfection. His colleagues dismissed him and were insulted at the mere suggestion of hand washing.

Semmelweis couldn’t find a scientific explanation for his findings, even though his work proved he was right. His published results showed that handwashing reduced mortality to below 1%. While head physician of the obstetric ward of Szent Rokus Hospital in Pest, Hungary, he virtually eliminated childbed fever. Between 1851 and 1855 only 8 patients out of 933 births died from the disease. When a successor took his position, mortality rates immediately jumped sixfold to 6% but physicians said and did nothing.

Only after his death were Semmelweis’s practices widely accepted. The great Louis Pasteur offered a theoretical explanation for his observations – germ theory.  Dr. Joseph Lister acted on Pasteur’s research, practicing and operating using hygienic methods. That brings us to our next great physician.

From Sewage to Sterilization. Joseph Lister (1827-1912) was a British surgeon who was the founder of antiseptic medicine and a pioneer in preventive medicine. He introduced the method of sterilizing surgical instruments with carbolic acid, greatly reducing the risk of post-operative infections. At that time it was believed that exposure to bad air caused infections in wounds and doctors didn’t wash their hands before surgery. As a result, many patients developed infections and died shortly after surgery, even if the procedure was successful.

Lister had read about the treatment of sewage with a chemical called carbolic acid that reduced diseases in cattle grazing on sewage-treated fields. Lister experimented with the same chemical and developed a technique of treating surgical instruments with carbolic acid. In August 1865, he applied a solution of carbolic acid to a serious wound on the leg of a seven-year-old boy. No infection developed and the wound healed completely after six weeks.

And yes, Listerine was named after him!

The Father of Modern Medicine. Many of the discoveries that Harvey Williams Cushing (1869-1939) made in the 19th century are still used today and as a result, he is widely considered the “Father of modern medicine.” Perhaps he is most famous for discovering the use of local anesthesia during surgery, and creating the specialty of neurosurgery with his studies of the central nervous system.

Dr. Cushing developed many of the tools, techniques, and procedures used in surgical theaters today including Cushing’s Forceps. He studied the effects of blood pressure during surgery and emphasized the importance of regulating it during procedures. He also discovered Cushing’s syndrome and polyglandular syndrome.

By the early 20th century, Dr. Cushing had already developed primary surgical techniques for the brain and made full use of x-rays and electric machines to understand the complex aspects of the brain such as the cortex. René Laennec (1781-1826) was a French physician who invented the stethoscope. The creation of clinical auscultation (listening to and identifying sounds made by organs) was a new method of diagnosing diseases. Before this, doctors would place their ear on the chest of a patient to listen to chest sounds. Laennec found this embarrassing while diagnosing women which led to his development of a “chest examiner”.

In 1816, while a physician at the Necker Hospital in Paris, a young overweight woman came to Dr. Laennec complaining of chest problems. In order to avoid an embarrassing situation, he rolled some paper into a cylinder and placed one side on the woman’s chest and the other to his ear. Finding that he could hear sounds more clearly, he improved on that improvisation and designed the stethoscope. Henry Gray (1827-1861) was an English anatomist and surgeon, who wrote the anatomical bible “Gray’s Anatomy”. He learned anatomy by personally making each dissection rather than by watching others, as was the practice usual at the time.  In 1855, (at 28 years old) he decided to produce an inexpensive and accessible textbook on anatomy for medical students. He wrote the text and his colleague Henry Vandyke Carter illustrated each organ.

In order to study fresh organs, Gray and Carter used the Anatomy Act of 1832 which allowed doctors to procure unclaimed corpses and to dissect donated bodies without penalty. For 18 months, Gray and Carter dissected bodies to have firsthand knowledge of human anatomy. The book was published in 1858 as ‘Anatomy: Descriptive and Surgical’, a book 750 pages long with 363 illustrations. Now called Gray’s Anatomy, the latest edition was published in September of 2015.

These are a tiny number of the many great physicians who have built the foundation on which today’s medical practice is built. Clearly, there are many more who have helped to improve patient care and who have helped reveal the secret inner workings of the body and stem the horrific effects of disease.

We know that you make a difference every day you practice. For the advances you make in understanding your patients, effectively treat their ailments and disease, ease pain, provide reassurance and comfort, and further research we thank you. Happy Doctors’ Day.