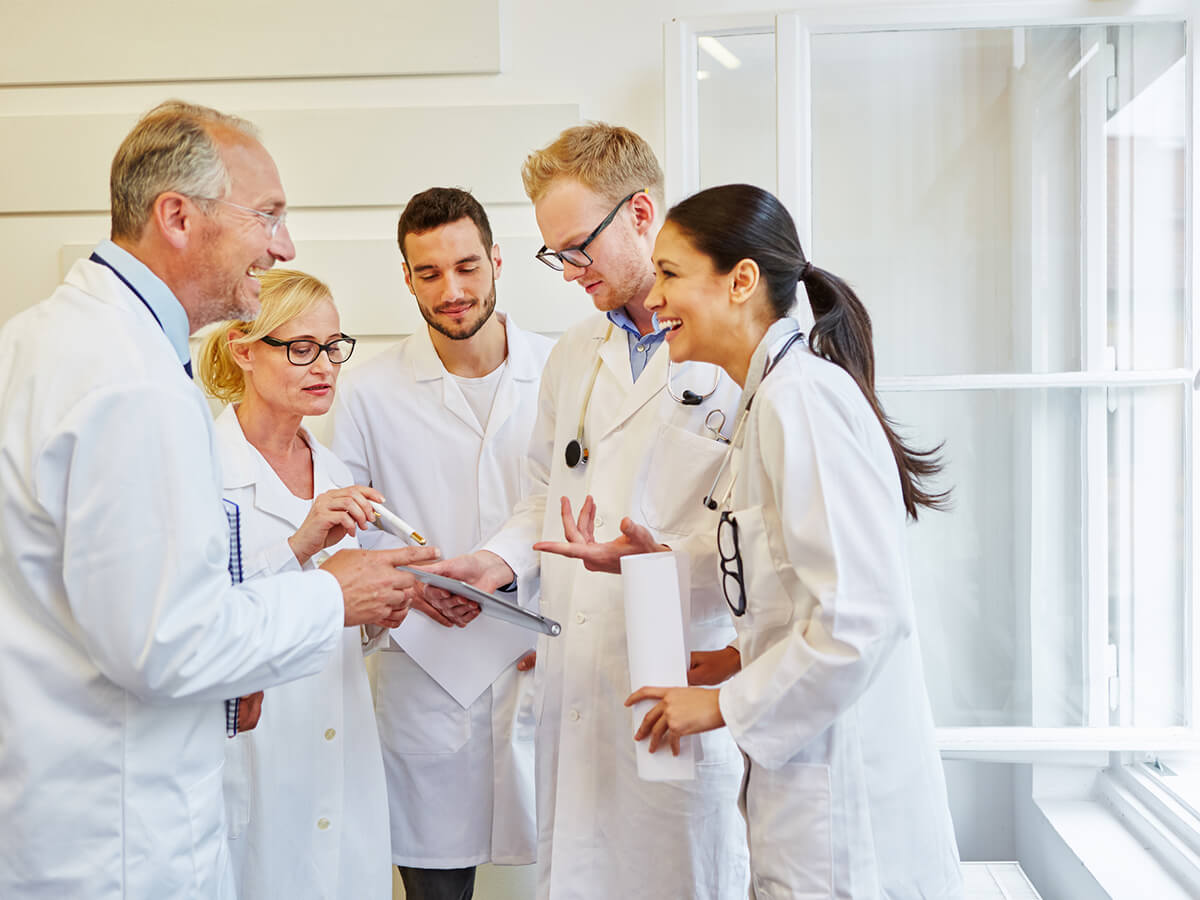 March is the time when we celebrate Doctors’ Day. What better way to celebrate that than with a few good jokes? Some are great one-liners, some help you make fun of yourself, and some are just irreverent. That’s necessary actually, because without some self-deprecating or gallows humor, how would you ever get through the life-and-death nature of your everyday work? Here are some doctor jokes and doctor puns; feel free to memorize them and spit them out to your colleagues at the most inopportune moment!

Teller: You certainly do! This is a bank.

Nurse: No change yet.

Patient: Doctor, I get heartburn every time I eat birthday cake.

Doctor: Next time, take off the candles.

Patient: Well, at least I don’t have cancer.

Why did the dalmatian go to the doctors? Because every time she looked in the mirror she saw spots.

I played hide and seek in the hospital, but they kept finding me in the ICU.

Why did the doctor laugh at the X-ray? Because it was humerus.

I’ve got a disease where I can’t stop telling airport jokes. The doctor says its terminal.

Doctor: I have some bad news and some very bad news.

Patient: Well, might as well give me the bad news first.

Doctor: The lab called with your test results. They said you have 24 hours to live.

Patient: 24 HOURS! That’s terrible!! WHAT could be WORSE? What’s the very bad news?

Doctor: I’ve been trying to reach you since yesterday.

A man goes to his doctor for a complete checkup. He hasn’t been feeling well and wants to find out if he is ill. After the checkup, the doctor comes out with the results of the examination.

“I’m afraid I have some bad news. You’re dying and you don’t have much time,” the doctor says.

“Oh no, that’s terrible. How long have I got?” the man asks.

Making Fun of Yourself

What’s the difference between a general practitioner and a specialist?

One treats what you have, the other thinks you have what he treats.

At a medical convention, a male doctor and a female doctor start eyeing each other. The male doctor asks her to dinner and she accepts. As they sit down at the restaurant, she excuses herself to go and wash her hands.

After dinner, one thing leads to another and they end up in her hotel bedroom. Just as things get hot, the female doctor interrupts and says she has to go and wash her hands. Once she comes back they go for it. Once they finish, she gets up and says she is going to wash her hands.

As she comes back the male doctor says, “I bet you are a surgeon”.

She confirms and asks how he knew.

She then says, “I bet you’re an anesthesiologist.”

Male doctor: “Wow, how did you guess?”

But really, they need me:

Dad’s pager beeped, summoning him to the hospital, where he is an anesthetist. As he raced toward the hospital, a patrol car sped up behind him—lights flashing, siren blaring. So Dad hung his stethoscope out the window to signal that he was on an emergency call.

Within seconds came the policeman’s response: a pair of handcuffs flapping outside the police car window.

For the Love of Lists

Things You Don’t Want to Hear During Surgery:

Comments purportedly made by  patients to physicians during their procedures.

My friend and his rock band were playing a concert at the psychiatric hospital where he worked as a musical therapist. The audience was a little too quiet for his taste, so the guitarist decided to do something about it. He grabbed the microphone, pointed to the group and yelled, “Are you ready to get a little crazy?”

A patient at my daughter’s medical clinic filled out a form. After Name and Address, the next question was “Nearest Relative.” She wrote “Walking distance.”

What you wish you could say….

Two doctors and an HMO manager die and line up together at the Pearly Gates. One doctor steps forward and tells St. Peter, “As a pediatric surgeon, I saved hundreds of children.” St. Peter lets him enter.

The next doctor says, “As a psychiatrist, I helped thousands of people live better lives.” St. Peter tells him to go ahead.

The last man says, “I was an HMO manager. I got countless families cost-effective health care.”

St. Peter replies, “You may enter. But,” he adds, “you can only stay for three days. After that, you can go to hell.”

What Are Doctors and Nurses Most Thankful For In 2016?