The Future of Anti-Aging Research 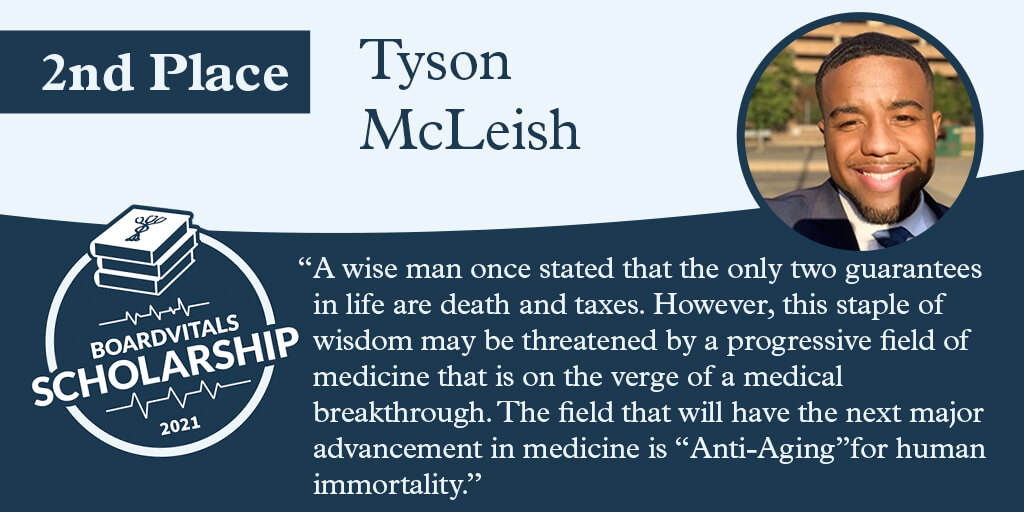 We received hundreds of submissions for the 2021 BoardVitals Medical School Scholarship. Applicants were asked to answer the question “In what field do you think the next major advancement in medicine will occur?”

Our 2nd place winner, Tyson McLeish, is a current medical student. For his scholarship essay, he wrote about anti-aging research and how it will impact the future of the healthcare industry. As our second-place winner, Tyson was awarded $1,000 to put towards educational expenses. Congratulations to Tyson and to all of our winners! Check out Tyson’s essay below.

A wise man once stated that the only two guarantees in life are death and taxes. However, this staple of wisdom may be threatened by a progressive field of medicine that is on the verge of a medical breakthrough. The field that will have the next major advancement in medicine is “Anti-Aging” research, which bestows a mission to prolong the quality and length of lives in humans along its ultimate pursuit for human immortality. The societal skepticism behind this pursuit has provided “anti-aging” researchers the same inspiration that has driven scientists to other unfathomable discoveries throughout human history. The innate human desire to uncover the unknown and expand the perceived limitations of human capacity has propelled human ingenuity to advancements in technology, healthcare and has just begun to extend into “Anti-Aging” research.

By taking a comprehensive outlook on healthcare, we uncover that the primary cause of mortality in humans is not cancer, heart disease or diabetes but it is rather aging itself. Our biological progression throughout life leads to a breakdown in the physiological processes of our cells and organs over time that heeds to an internal cellular programming for apoptosis. Through understanding the foundation of human aging and the consistent factors that elicit this process, scientists will be able to reprogram our internal epigenetic clock to extend not only the length of human life but more importantly increase the quality of everyday living. This cellular programming that has been the fundamental component to human aging can provide the insight to needed solutions to the prevalence of fatal diseases such as cancer, heart disease and Alzheimer’s.

The recent progression of “anti-aging” research has extended past exponentiality, where our understanding of human aging over the last decade has far exceeded our knowledge over the previous years of human history. Similarly to the advancement of technology, our current scientific understanding of aging has compounded upon our previous knowledge in this field which has led to breakthroughs far sooner than expected. Whether it be the development of telomere lengthening techniques, the impact of hyperbaric oxygen treatment on the reversal of aging and the potential for induced pluripotent stem cells to replenish aging cells, the future of “anti-aging” research is brighter than ever before.

The future of human society can be predicted by our most speculative industry, which would be our robust financial sector. With a recent influx of billions of dollars of investment into “anti-aging” research by government institutions, research corporations and investment hedge funds, it is evident that this field has a promising future mimicking the earlier years of the rise of computer technology. The foundation of science is not to continue with the status quo but continually push the boundaries of human knowledge to answer the questions we have yet to even ask. “Anti-aging” research is on the verge of becoming the next major advancement in medicine and its mark on society has just begun.

Robotic Surgery: The Future of Healthcare

Doctors as Patients: What it’s Like on Both Sides

Top 10 Medical School Scholarships to Apply to in 2020